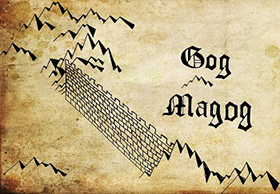 Excerpt from “The Beginning of the End”

The subject of Gog & Magog alongside the subject of Dajjāl is undoubtedly the most astonishing topic within the domain of eschatology. Scholars from both Islām and Christianity have contributed much literature in the past, with view to unraveling the mysterious identity of these infamous tribes. Majority of those contributions have almost constantly concluded that we are living in the age of Gog & Magog.

Whilst many scholars have dedicated a gargantuan amount of research to unraveling the identity of these mysterious ‘beings’, our methodology will not be an inquest of identification. Rather, our approach will be one of clarifying many false notions pertaining to Ya’jūj and Ma’jūj, but at the same juncture, we will provide a ‘both sides of the coin’ approach, whilst directing the reader to a more logical viewpoint, which is of course, in submission to the textual evidences.

The common misconception pertaining to Gog & Magog is that they are foul beasts with limbs resembling that of wild animals, which is undoubtedly the most common response from the layman when quizzed about Gog & Magog. Many of these far-fetched stories and legends trace their routes through various Israelite traditions. Those scholars who have supported these bogus claims have done a great injustice upon their flocks. Even if there are isolated narrations juxtaposing Gog & Magog with animalistic features, there are far more narrations which have declared them to be human beings. To utilize isolated narrations as dominant opinions whilst forsaking numerous other textual evidences coupled with the intellectual evidences is indeed uncharitable on behalf of lazy scholarship. A cursory study of the subject from the major books of hadīth reveal that Gog & Magog cannot be beasts because they are ‘human’.

Narrated by Sayyidunā Abū Saīd Al-Khudhrī رضى الله عنه that the Prophet صلى الله عليه وسلم said, “The people will continue performing the Hajj and Umrah to the Ka‘bah even after the appearance of Gog and Magog.”[1]

If Gog & Magog were indeed ‘beasts’, one would assume that their chaotic release would cause people to remain in hiding. It is inconceivable to imagine life moving along ‘normally’ whilst there are creatures roaming the earth? Why would people continue to visit the Ka’bah after the release of these wicked people? The only logical explanation, which is confirmed by various ahadīth is that they will be human beings. Being human allows them to slip by undetected whilst advancing their evil scheme to rule over the world until such a time that they will be called upon to reveal their true identity.

Further proof regarding their human nature may be seen from the following narration,

“Verily Gog and Magog are of the progeny of Ādam”. [2]

Being of the progeny of Nabi Ādam علیہ السلام can only mean that they are human beings. This is further corroborated by another narration which states,

Sayyidunā Abū Saīd Al-Khudhrī رضى الله عنه narrated that the Prophet صلى الله عليه وسلم said, “On Judgment Day Allāh تَعَالَى will ask Ādam علیہ السلام to pick out from his entire progeny those who would enter the hellfire. Ādam علیہ السلام will ask: ‘O Lord, who are they?’ Allāh تَعَالَى  will say, ‘Nine hundred and ninety nine of a thousand are for the hellfire while one is for heaven.’ On hearing this, the companions were overtaken by fear and they asked, “O Messenger صلى الله عليه وسلم of Allāh تَعَالَى who will that one for heaven be?’ The Prophet صلى الله عليه وسلم said, ‘Do not grieve, the nine hundred and ninety nine will be Ya’jūj and Ma’jūj while you will be the one for heaven.”‘ (i.e. your numbers in relation to them will be one in a thousand).[3]

It is evident from the aforementioned ahādīth that Gog & Magog are from the progeny of Nabi Ādam علیہ السلام. It also shows a sort of ‘infiltration’ by them to such a point that out of every thousand, nine hundred and ninety nine will belong to the age of Gog & Magog. This assimilation of the people in huge numbers into the Gog & Magog ‘melting pot’ will undoubtedly be one of the greatest phenomenons in human history. Those who are caught up in the acquisition of the luxuries of this mundane world, will be easy targets, but those whose religious consciousness keeps them steadfast on the Qur’ān and Sunnah, will not yield to the social pressures of ‘assimilation’ in that era!